Curbed: A new riverfront park aims to build bridges, not barriers, for immigrants

Curbed: A New Riverfront Park Aims to Build Bridges, Not Barriers, for Immigrants

In San Antonio, Texas, the new San Pedro Creek Culture Park, a linear park and greenspace which some of the project’s planners and designers have dubbed the Latino High Line, seeks to build literal and metaphorical bridges at a time when others are talking about erecting barriers.

“This isn’t just a park, but a place of cultural identity,” says Henry R. Muñoz III, the project’s lead designer. “I like to refer to the idea of mestizo regionalism. Pretty much every major community in the United States has become more mestizo, more blended, more Latino: Houston, Dallas, New York City, Chicago, Los Angeles. They all have rising populations and Latino influence.”

Located on a creek that was central to early settlement in the region, the new Culture Park fuses public art, landscaping, and placemaking to create a dynamic cultural space in an area west of San Antonio’s downtown.

Commissioned in 2015, the $125 million park, which will eventually span 2.2 miles when completed in 2020 , will include 60,000 feet of new walls, murals and artwork, four miles of walking trails, 11 acres of landscaping, and eight restored and redesigned bridges. The former concrete-lined channel now features pools for children to splash in and play, and intricate benches and gathering spaces.

Muñoz, principal of Muñoz and Co. and the park’s cultural design leader, says the park was created and built to reflect the city—this year is San Antonio’s 300th birthday, or tricentennial—and not current events. He calls it a prime example of Latino Urbanism, public design that reflects a more democratic, multicultural conception of place.

He also feels it couldn’t come at a better time.

“San Antonio exemplifies the idea that immigration isn’t new, it’s always been here, it’s our strength, and it builds great American cities,” he says. “This isn’t a reaction to the moment, but I sure am glad this expression of cultural expression and unity is being birthed at this moment, to remind us of where we came from and where we should be headed.” 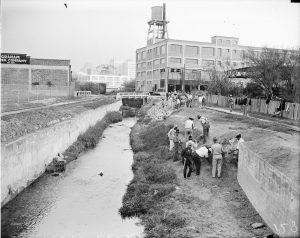 Telling the history of San Antonio
Muñoz, who grew up in San Antonio, has long been interested in the San Pedro Creek area. Its long history reflects the evolution of San Antonio and of many other major American cities. One of the first non-native settlements in the region—it’s been called the “libertatis cunabula,” or cradle of liberty—the shores of the creek became a traditional center of Latino culture, home to scores of small businesses on the waterfront. The waterway also functioned as a dividing line between white and Latino settlements. Munoz remembers his grandmother saying the creek “might as well have been the Rio Grande.”

In the 20th century, the creek also reflected the changing ways cities and planners viewed development and public space. During the early part of the century, the waterway was channelized and covered in concrete to regulate flooding, and then the urban renewal push of the’60s and ‘70s cleared away many of the original Mexican-American homes and businesses on the surrounding shores.

Muñoz and others see the potential in transforming this drainage ditch into a place that honors the culture, community, and commerce that once made this area so vital, while also building a public amenity that can help surrounding neighborhoods flourish in the 21st century. 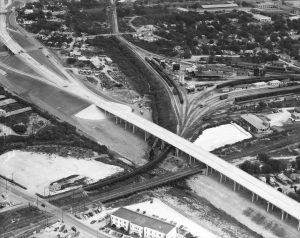 Creating a place for cultural expression and celebration
The first section of the park, which debuted on Saturday, covers a half mile of the creek, from North Santa Rosa Street to Houston Street, and features artwork reflecting the city’s history and Latino community. In addition to scores of native plants and landscaping that will help with flood mitigation, the park offers a colorful, dynamic window into the city’s culture and heritage.

The park’s focal point, the Plaza de Fundación, features “Rain from the Heavens,” a public installation with panels cut to show the position of the stars on May 5, 1718, the date when San Antonio was founded. The park’s new walkways also feature intricate murals and tile work from local artists, including Adriana Garcia, Katie Pell, Alex Rubio, Michael Menchaca, and Joe Lopez, which celebrate the history of San Antonio and Bexar County.

Muñoz believes the park will undoubtedly lead to more economic development, and more people living downtown. The Frost Tower, a forthcoming 23-story tower under construction nearby, has been seen by many as a symbol of growth in this part of the city. But more important, he says, is what the park symbolizes about San Antonio.

“San Pedro Creek is a series of bridges, and is a place that brings people together, not divides them,” he says.